In the next of the series of inspirational women in sport, I take the time to chat to Cayla George.

This is the story of a lanky kid made good. Even at the age of nine, Cayla George (nee Francis) had the drive and passion to make the most of the talents God had bestowed upon her. Originally, George played netball but thankfully, basketball won her heart.

As we all know, George is an amazing talent. She was representing South Australia in the under 16 Nationals when some AIS coaches came and chatted to her. They tapped into her natural work ethic and she saw just how far she could go. Being honest, there is not much further George can go now. She is in the world’s best league, the WNBA, and is a fixture (when available) in Australian national team. 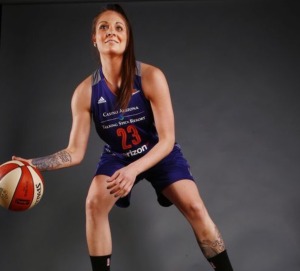 Still, George has a thirst for improvement. Yes, in 2005 the AIS tapped the potential but it has been her time playing in the WNBL which has certainly prepared her for bigger and better things. Every baller I speak to says the level of the WNBL is amazingly high; the standard of play is among of the toughest in the world.

That being said, George is finding a home in the WNBA. George has completed two regular seasons with the Phoenix Mercury, feeling more and more at home. She has a tremendous support network in Phoenix which helps her to remain focused and achieve her life goals. Anywhere a vegan can have a selection of places to eat has to feel like home, right?

George has always had a solid game; standing 193 cm, she has an amazing ability to defend the opposition big and then step out and nail the three. Her coaches throughout her junior years encouraged her to have a good inside/outside game. If nothing else, George will never be able to be boxed as one type of player.

“When D speaks, you listen.” Not a bad mantra to live by when playing for the Mercury!

This has helped her fit into a team with two legends of the game in Diana Taurasi and Brittney Griner. George’s primary role on the team is to back up Griner, giving her time off the court. This means there are times when George will not get a huge amount of court time. Still, the time spent with these two is having a huge impact on the mental side of George’s game. She is learning from the experiences of arguably the greatest player ever in the WNBA in Taurasi. “When D speaks, you listen.” Not a bad mantra to live by when playing for the Mercury!

But, like every female athlete who does not play tennis or beach volleyball, George has had to think outside the box to set herself up for the future. This is where Rehmee and Coco comes in. In 2016, George was making candles in her kitchen and her vision grew from there. George has a passion for home décor and all things that smell good, so the candles became a natural extension of that.

As a Christian, George tries to be the best version of herself every day she is blessed to be on this earth. To her, this means that the candles are a sample of God’s light shining in the world. George extended the brand to include apparel because it felt right to have God’s words “walking around these worldly streets, planting seeds, shining His light and illuminating darkness.”

George is even able to help her family from the other side of the world as her sister Ebony runs Rehmee and Coco when Cayla is overseas. The brand has grown in just one short year, with the website being launched in April 2017. Thanks to the sisterhood which is the WNBA, other players have been purchasing products and posting to social media accounts to help raise awareness. Even NBA players like Kyrie Irving are getting into the spirit of getting candles.

It is this bond within the basketball which has shown George to be the inspiring athlete we all know and love. The Phoenix Mercury has been working closely with George in an effort to help gain exposure for the business. Rehmee and Coco was able to team up with Cancer Council of America to help raise awareness and money for breast cancer.

George is not only the driving force behind her brand, she is also the person who chooses the scents. The only exceptions are the ones inspired by her family. The messages on the tank tops are chosen by George. They are some of her favourite scripture passages, showing the depth of character of the person who is Cayla George.

George is currently aiming to make this brand her future after basketball. While she is still young, only 28, the salaries available to women in sport tend not to allow players to set themselves up for the future. The sacrifices our women make to play their chosen sport at the highest level are many. George gets to spend time with her husband, Kailou, for part of the time she is away, but her beautiful fur babies need loving too.

Let us all get behind one of the true entrepreneurs and support Rehmee and Coco. The world needs more people like George in it, ones who fill the world with love and the light of the Lord.

For product details, see the link below.